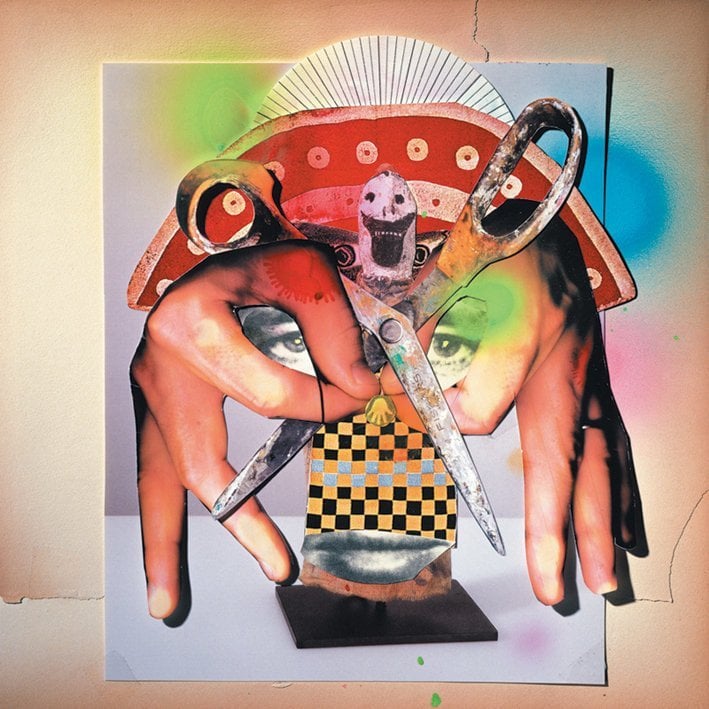 The debut album by Illuminations was the inaugural offering from All Hands Electric. Featuring the vocals and guitar of Zachary Cale and backed by long time friends Kris Benedict, Ryan Johnson and Phil Glauberzon See-Saw falls into what Gram Parsons called “cosmic American music”. Accordingly, it lies somewhere between the country-tinged soul of Big Star and the punk spirit of The Wipers. It was recorded and produced by the band in their basement on an 8 track reel-to-reel machine. The end result is an enigmatic album that is both familiar and foreign; one that wears the suit of American rock & roll, but broadcasts anthems from another universe.

“See-Saw is the best album I’ve reviewed for Still Single, hands-down. There, that’s out of the way. (HA!-Ed.) NYC’s Illuminations choose to be a part of the CollageCore (I made that up…it’s mine!) movement, a trend guilty of visual rather than sonic homogeny. It’s true that, upon processing See Saw’s neon stencil cover art, I expended to hear yet another band wholly-unburdened with songwriting skills and flaunting a calculated lack of fidelity. I was wrong on both counts… embarrassingly so. As in, it was quite surprising to hear at least three AMAZING pop songs before the record was flipped. Stylistically, don’t expect to be knocked silly by invention. Expect countrified indie-pop and psych lite, recorded clean and efficiently. But the fucking hooks on this one … wow, it makes writing about a good hook ten times harder than it usually is. Wilco wasn’t the American Radiohead (figuratively) during the first half of its career because no song was positively devastating or uplifting, and Illuminations has assembled a whole album of what the world wants old Wilco to sound like. You think it’s easy to operate within the confines of Americana/roots-rock/alt-country without coming off as insufferable slummers or instantly-forgettable rural action figures? It isn’t, but Illuminations do this … perfectly. As a closing clarifier, See Saw dabbles in enough Elephant Six-isms and dressed-down indie rock to carry a wide appeal. If this band sticks to it, they will be huge. You know … in a good way.”
-Andrew Earles (STILL SINGLE/DUSTED MAGAZINE)

“Illuminations are one of my favorite new bands. I’m late for the bus on this one, but as I always stress, TIMELINESS is NOT next to godliness; I’m all about discovery, no matter when something came out. Andrew Earles described I-nations as being as good as everyone wanted old Wilco to be. I couldn’t agree more with this statement. I, of course, don’t much like Wilco from any era, but it’s true that Illuminations tackle a genre — bittersweet, tea-sippin’ alt country/Americana mixed with indie-rock — that has reduced many bands to cliches, unknowing parodies and worse. Tom Petty, The Stands, Jeff Tweedy … they’re all in there, but that only scratches the surface. Take the time to get to know See-Saw and a new world will open up right in front of you, like a pop-up book with pictures from your boring — but not anymore! — life.”
-Grant Purdum (THE GUMSHOE GROVE/TINY MIX TAPES)

“Lyrics aren’t something typically important to me in rock, I’m more interested in the sound and melody but goddamn if these guys don’t write some great lyrics and powerful music to back them. Falling somewhere between Clap Your Hands Say Yeah and Neil Young (wide gap, I know) this band has some real potential
-LIVING EARS

“While See-Saw plays perfectly normal, if slightly buzzed, what makes Illuminations exceptional is their no-fear strokes at epicness; the woozy into raging anthem endgame of “Rising,” the seven-minute tin-pan hymnal of “We All Say Goodnight,” and the constantly atmospheric vibe of “Laundry List” could compete with any lukewarm fuzzies induced by the globe’s current crop of stadium cozies (Coldplay, Kings of Leon, Snow Patrol). That might ring hollow, but that only means they deliver genuine pop songs through grand gestures. Unlike those bands, this seems in earnest with no self-importance attached.
-Kevin J. Elliott (PRIMITIVE FUTURES/THE AGIT READER)