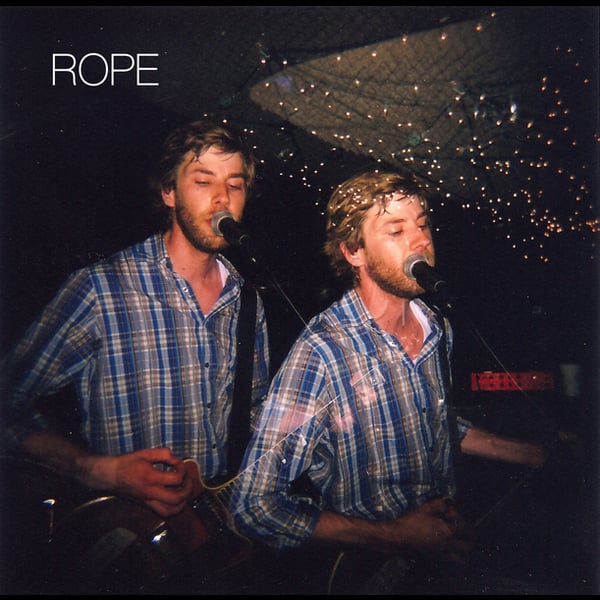 Tracks:
A. Montagne
B. I Can’t Pretend To Understand

“Montagne” is the recording debut of the Brooklyn band Rope. It began as a one man band studio project by Josh Clark, but has recently turned into a fully operational machine. Playing no-holds-barred rock, somewhere between the slow-burn chug of Crazy Horse and the power pop metal of Thin Lizzy. Rope favors all things guitar. With guitarists John Stendrini (Federale) and Zach Cale (Illuminations) flanking Josh, a natural chorus effect materializes between the guitars supplying the band with a sonic palette for constructing mammoth sounding riffs. Featuring the full speed ahead rocker "Montagne" on the A side and a four chord barn-stormer on the flip. This is the first in a series of 7" singles.

“NYC rock in name and deed, driving and electrified, bright and just a little dirty, with a sound that could have come from any point from the opening of CBGB onward. “Montagne” rides a persistent, upbeat drum lockdown across the nighttime party horizon, chilly and racing past with cleanly sung vocals, electric violin scratch and solid guitar riffage (courtesy of Zachary Cale and Federale’s John Stendrini). It fades out, only to come back in an extended instrumental coda that lays into that groove for just a little while longer. They’ve nailed that late ‘70s/early ‘80s studio vibe down cold, right through to the all-analog recording and mastering; if nothing else, it will remind you of the same sort of manufactured excitement you’d feel from hearing, say, “The Driver’s Seat” by Sniff ‘n’ the Tears, which, if you’re me, is not a bad thing to aspire to. “I Can’t Pretend to Understand” makes out with the girl you had an eye on right in front of you, slightly gloomy but earnest power-pop with the violin adding a level of sound you wouldn’t often consider in modern rock. For what this is, I love it. It’s cool when bands acknowledge what they are up front, but aspire to more than three chords and getting blackout drunk, and can effectively pull it off. I look forward to watching these guys play some time.” -Doug Mosurock (STILL SINGLE)